Why we won’t be suggesting the contraceptive pill for my daughter!

This may seem controversial as  most of the women  have been on the pill  However, we wanted to write on this topic because the birth control pill is basically handed out like candy to young women who have barely had a chance for their cycles to start working, through to woman who are ending reproductive years, often to “control” symptoms of hot flushes. They are told it will “regulate” their cycle and in essence, magically get rid of acne, painful or heavy periods, oh & stop you from getting pregnant. What they are not often told is how it works & the issues & side effects it can cause.

Here are some of the issues with the Pill:

So for all the  daughters & all the other women out there, let’s start with what’s meant to happen in a natural cycle & how the pill works.

In a natural cycle there is a cascade of hormones which feed off each other like a beautiful symphony, all working together in succession. Woman’s hormones are actually pretty amazing & yes having a period is not the greatest (to say the least) but on the flip side, that peek of hormones around ovulation can give us a boost of motivation, and libido for that matter (little shout out there to our misunderstood friend testosterone). While progesterone in the second part of the cycle can make us feel more relaxed & chilled out. At the end of the day it’s how we as females are designed, and as inconvenient as it may seem there are so many mechanisms at play occurring behind the scenes that you may not be aware of. Going on the pill doesn’t just stop you getting a period. Unfortunately it’s not isolated to that one function & can have a vast impact.

The pill shuts down communication between the brain & the ovaries. For all the young women, let me say that again so you understand the magnitude of what I’m saying. It shuts down the communication between the brain & the ovaries! Which means that for as long as you’re on the pill, you’re ovaries are basically turned off, they’re offline so to speak. This may not seem like big deal but imagine if it was your liver, or your stomach, or your heart! Essentially you’re shutting down a whole organ. I can understand overlooking this because the only thing the ovaries do is make you ovulate right? Which let’s face it, unless we’re trying to get pregnant, we don’t really care about. I get it, but how can we expect that turning off a whole system will not lead to ramifications, either while still on the pill or when you come off it. I’ll tell you right now it does!

So how does the pill shut things down exactly? Instead of having higher amounts of estrogen in the first part of the cycle, and progesterone in the second, the pill pumps a constant level of synthetic estrogen and/or progesterone into your system, essentially tricking your brain into thinking your ovaries are producing enough so they don’t have to continue working. This means there is no cascade of hormones, hormones which help to balance out other hormones like cortisol or neurotransmitters like serotonin & dopamine.

This dis-regulation of neurotransmitters as well as a constant bombardment of high levels of synthetic estrogen is where anxiety & depression can sneak in, often gradually so they are often dismissed as having no correlation to the pill yet people start feeling worst & worst. I was one of these people & while I can’t say this was the definitive reason for my bouts of anxiety & depression, I’m certain that it was a player in it, as well as gut dysbiosis (or leaky gut) which can also be caused by the birth control pill (*face palm*). If you’ve ever had anxiety and/or depression you can understand why this is such a big deal, and I feel you.

The pill disrupts the flora of your gut, and there is research to suggest it can cause leaky gut through increased inflammation which can lead to a whole other level of issues from bloating, diarrhoea, food allergies and autoimmunity. This is because our gut houses most of our immune system as well as our enteric nervous system, which is seen as our second brain. So again, leaky gut can be a major factor in anxiety and depression. I’m getting off track however.

The pill also depletes the body of nutrients like zinc, b vitamins, selenium, magnesium, folate, all important for your immune system, mood & hormones. If you add leaky gut on top of that, you’re going to be having trouble absorbing these nutrients anyway, and thus you can see how it’s a viscous cycle.

Often the reason women or young girls (this was me) are put on it in the first place is to “regulate their cycle.” To regulate their skin, their heavy bleeding, their painful periods etc. This infuriates me and I call BS! The pill doesn’t regulate your hormones. It turns your natural hormones off. The bleeding you get when you’re on the sugar tablets is called breakthrough bleeding. It is not a period & gives you no indication of how your natural cycle is! So when you come off the pill not only has it not “fixed” the initial imbalance in the first place but can often lead to other issues you didn’t have to begin with like androgen rebound, where the brain and ovaries realise they haven’t been producing testosterone, freak out and start flooding your system. This can come in the form of cystic acne, PCOS (poly cystic stress ovarian syndrome) and / or insulin resistance.

The part that upsets me the most is that these women or girls & often their mothers, are guided to think that this really will regulate their hormones. They think they are doing the best thing for their body, and that there are no side effects because this is what they are told and reassured to be the case.

Aside from contributing to PCOS which can lead to anovulatory cycles, or very long & irregular cycle, women having a harder time falling pregnant, there are other ways the pill can impact fertility.

You can’t have your ovaries turned off for years, maybe even decades and then expect them to just turn on like nothing happened. The brain and ovaries have to start talking again, not to mention your ovaries have to remember how they do their job (what was that again?). It’s a pretty big ask to be honest, and one that many times the ovaries and brain have a hard time doing. One of the other ways some pills stop you from getting pregnant is by causing thinning of the uterus lining so that implantation can’t occur. Unfortunately, coming off the pill doesn’t guarantee that this lining will go back to the thickness needed for an embryo to implant for some time.

So if the pill has been suggested to you as a way of “regulating” your cycle, we urge you to look at exactly what’s going on hormonally in the first place, and instead of using a band-aid approach (which as I hope you can now appreciate can actually be doing more damage) let’s work out why you have PCOS, or endometriosis, or cystic acne, or irregular or heavy or painful periods. Let’s get to the root cause, because if you choose the band-aid solution, you’ll still be dealing with the same issue you had before you went on, maybe tenfold. I don’t say these things to undermine anyone’s symptoms or shame.

A great read on this topic is called “Beyond The Pill” by Dr Jolene Brighten: 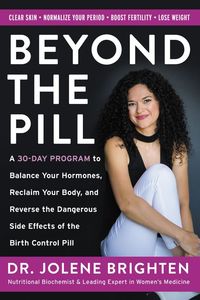 If regulating your cycle for real is something you need support with, come & see us at Mornington Chinese Medicine. It’s what we do, and we’re pretty great at it : )

Pigment Issues and What to do About It by Andrea Murphy

The Truth About Rosacea by Andrea Murphy

Getting to the real cause of Acne – Andrea Murphy, Licensed Acupuncturist

Cosmetic Acupuncture: A Lesson About The Skin We’re In – Andrea Murphy, Registered Acupuncturist