The lie most, if not all of my fertility patients have been sold…. by Cath Brown – Dr of Chinese Medicine and Acupuncturist

The egg timer test, as its commonly touted & even promoted by IVF clinics & Fertility specialists to my dismay is accurately named the Anti-Mullerian Hormone test or AMH. To understand this test further lets understand your ovarian function first.

An ovarian follicle is a fluid-filled sac that contains an immature egg, or oocyte. During ovulation a mature egg is released from a follicle. While several follicles begin to develop each cycle, normally only one will ovulate an egg. After ovulation, the follicle turns into the corpus luteum.

The follicles that do not release a mature egg disintegrate, a process known as atresia, that can happen at any stage of follicular development. Theoretically, if you could know how many follicles are inside your ovaries, you could have an idea of how many eggs you have left. It is impossible to count how many follicles are in the ovaries because they are too small to be visualized. However, once a follicle reaches a certain stage, it can be seen via ultrasound.Follicles start off very, very small. All the follicles in the ovary start off as primordial follicles. A primordial follicle is just 25 micrometers—that’s 0.025 millimetres and are impossible to see with the naked eye, let alone on an ultrasound.

Every day, primordial follicles are “awakened” by hormonal signals and start to mature. As long as they continue to survive and graduate to the next stage, they grow larger and larger.

One of those stages is the tertiary stage. During this time, the follicle gains a fluid-filled cavity known as the antrum. Follicles with an antrum are referred to as antral follicles. They measure between 2 and 10 mm in diameter. For some perspective, an antrum follicle that is now 5 mm is 200 times bigger than it was as a primordial follicle.

Antrum follicles are finally visible on the ultrasound. Antral follicles produce higher levels of a hormone known as anti-mullerian hormone (AMH). This hormone circulates in your blood. Measuring AMH levels via blood work considered by IVF specialist & OBGYN’s as a way to evaluate ovarian reserves. So lets just recap the stages of folliculogenesis:

1.Primordial follicle: The stage all follicles are in within the ovaries of a newborn baby girl.

2. Primary follicles: The recruitment of a few primordial follicles into the primary follicle stage occurs every day, starting in puberty and continuing untilmenopause.

3. Secondary follicles: Involves the addition of theca cells, which will secrete hormones.

4. Tertiary follicles, also known as antral follicles: Follicles that contain a fluid-filled cavity called the antrum, at this stage follicles are visible via transvaginal ultrasound and it is at this point that AMH can be assessed via a blood test.

5. Graafian follicle: A follicle large enough to ovulate, only one or two of the tertiary follicles in each cycle will mature to ovulation.

6. Corpus luteum: Not technically a follicle anymore, the corpus luteum develops from the broken open follicle that released an egg. 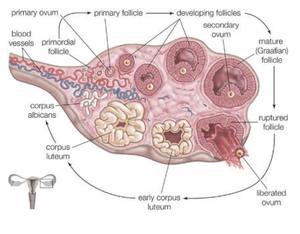 Are you sitting down?

The AMH test cannot determine the quality of a woman’s eggs or her total egg count! Why? Because it only assesses the AMH that is secreted by the egg sac/follicle that has started the maturation process to become the dominant follicle during that single ovulatory cycle. This test can only report on the amount of AMH secreted during one particular cycle it does not report on the other 500,000 primordial follicles awaiting recruitment in the primary follicle stage that occurs every day, starting in puberty and continuing until menopause. While there is also research indicating the contraceptive pill can trigger a false low AMH reading.

Unfortunately in clinic I have many female patients that come to me feeling depressed & defeated after receiving their “ovarian reserve” AHM test results. This is my response to them: This test is a useful tool for fertility specialists when determining the dosages of fertility drugs or the chances of harvesting eggs for IVF or if it is used in conjunction with other assessments when there are concerns that a woman may be at risk of early menopause.

Also as previously stated the AMH test can only report on the amount of AMH secreted during one particular cycle, it does not report numbers of primordial follicles awaiting recruitment in the primary follicle stage that occurs every day, starting in puberty and continuing until menopause.

Also, unfortunately this test is used too often for the commercial purposes of IVF clinics to incite unnecessary urgency in women of all ages to invest in egg freezing to “protect” her fertility, an enormous revenue-raising venture for IVF clinics. Deep breathe!

So ladies please pay absolutely no attention to anyone telling you’re your fertility is related to ovarian reserve if it has been assessed by the “egg timer test” or officially known as Anti-Mullerian Hormone (AMH) the blood test.

Feel free to say, thank you but no thank you very much!

The PMS Rollercoaster… YOU CAN GET OFF – by Dr Catherine Brown

Intermittent Fasting for Clear and Abundant Qi by Travis Clarke

Neck Pain – How, Why and What You Can Do – by Scott Stephens, Acupuncturist

Five Element Acupuncture. What is it? By Kerry Marshall, Licensed Acupucnturist

Intermittent Fasting for Clear and Abundant Qi by Travis Clarke January 21, 2020
The PMS Rollercoaster… YOU CAN GET OFF – by Dr Catherine Brown January 13, 2020
Acupressure for Birth – When to Step in and When to Knit – by Kerry Marshall Registered Acupuncturist December 9, 2019
Summer – Understanding a TCM perspective. By Scott Stephens, Acupuncturist December 2, 2019
Chinese Face Reading by Andrea Murphy, Registered Acpuncturist November 20, 2019
Thyroid Disease – The Functional Approach. By Dr Catherine Brown, Dr of Chinese Medicine and Acupuncturist November 13, 2019