The Moon and You

With a new moon due on Thursday we thought it was a great time to talk about the effects it can have on all of us, and how to be aware of changes you may feel during its different phases…

You only need to speak to teachers, parents, mental health workers, police or hospital emergency room staff to hear plenty of evidence for the notion that the full moon can affect human             behaviour., and not surprisingly animals and nature too. Children having tantrums, Alzheimer’s patients becoming difficult to control, more violence on the city streets and more women going into labour are all examples of Full Moon affects. Humans are after all 75% water and the moons affects on water bodies such as the tide are well documented.

There are midwife units who put more staff on during a full moon as they know that they will have an unexpected amount of patients. There is a theory that the pull of the moon has an effect on the Amniotic Sac and fluid the same way it does with other bodies of water, causing the waters to rupture without contractions. Women who live under a full moon rather than a house ovulate at the full moon, which makes you wonder what society would be like if all women     cycled together with the moon!

During a full moon many parents talk of their children being more hyperactive and more prone to tantrums. Even though science has been unable to explain this, statistics often show             confirmations of such incidences through large studies into perceived behaviour.

Nature also has some fascinating incidents such as coral, all species, spontaneously releasing their eggs into the sea on a specific full moon each year. Tree loppers in South America also work by the moon as tree sap rises at a full moon causing bug infestation followed by destruction of the wood as they burrow for the sap. If the trees are not cut down at the right time, millions of dollars are lost in wood that does not make the grade.

Yet others love the full moon, the beautiful glowing orb in the sky that smiles down on all of us. Perfect for late night summer strolls on the beach.

Although we have no way to control the moon, we can be aware of some of its behaviour changes and therefore be prepared for them. We can also enjoy the wonder and beauty of the full moon and all her positive affects! 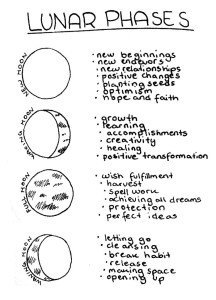