Did you know that Chinese medicine calls the skin the 3rd lung? The lungs are responsible for more than just respiration in Chinese medicine, they also help to create a boundary between the inner and outer world, much like the skin. Together with the large intestine, the lungs and the skin set the stage for boundary breath and renewal.

The lung and large intestine connection

We can’t talk about the lungs without talking about the large intestine because they are a yin/yang pair in Chinese medicine theory. This means they influence and balance one another. The colon separates the pure from impure, ensuring the vital nutrients are absorbed and wastes are properly excreted, in the same way the lungs take in O2 and exhale carbon monoxide. When there’s a backup in the colon and waste isn’t able to move efficiently, toxins can build up in the system. We know from a conventional perspective this can lead to an overloaded liver, imbalanced hormones and congested skin.

One common affliction of the lungs that I see often in practice is a kind of dryness and heat in the lungs known as yin deficiency. This can manifest as a dry cough, dry skin, red cheeks and perhaps a scratchy throat, or hoarse voice. Some of these symptoms are so mild and chronic that the patient may be more concerned about dry and red skin, but you can get an idea of how the lungs being in disharmony might lead to some commonly noted issues with the skin – dryness and redness in the cheeks around the nose.

Another common condition connecting the lungs and the skin is eczema. From a TCM standpoint this can arise from a lung deficiency we know in western medicine terms as Asthma. It’s a super common connection that many eczema sufferers can attest to. In terms of TCM patterns, there’s usually some aspect of lung deficiency, heat and occasional dampness. The dampness component is often why eczema sufferers are aggravated by dairy as dairy is a damp forming food in TCM.

The lungs and the immune system

The lungs facilitate a kind of defensive Qi called Wei Qi that circulates between the skin and muscle. Wei Qi defends the body by circulating a protective layer to combat external pathogens and the pores of the skin, controlled by the lungs, act like gate keepers. The strength of the Wei Qi depends on the Qi of the lungs, the quality of foods we eat, and our ability to absorb nutrients from foods. Those who have lung deficiencies may be more susceptible to illness and allergies. One common condition involving the immune system I see that connects the lungs and skin is seasonal allergies with hives.

The lungs and complexion

All of the organs in TCM influence our complexion. Like in face-mapping, each aspect of the face represents a particular organ. The lungs are represented around the lower aspect of the cheeks (pic below). It’s also said that the lungs mist our skin and hair with fluids, contributing a health lustre to the skin and shine to the hair. If the lung is dry and/or there’s heat in the lungs the lustre will be dull, and dryness will be present. There may also be redness and dryness in the lung area of the face. 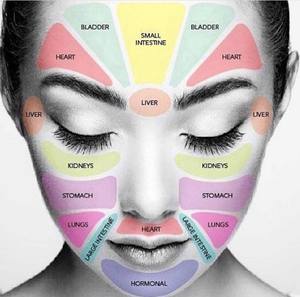 When it comes to the lung and skin relationship breath is the crux. Many of us breathe shallowly and aren’t used to taking deep diaphragmatic breaths into the lower lobe of our lungs, so the lungs aren’t being used to their fullest capacity, and therefore aren’t circulating vital Qi as well as they could. One of the best ways to strengthen your lungs is practice deep diaphragmatic breathing. This is difficult for many people at first and they often become lightheaded. They might even notice a flush to their cheeks during longer breathing exercises. Over time all of this becomes much easier and you may even notice a nice even glow to your skin. Developing a stronger physical capacity to the lungs by hiking, jogging or brisk walking are other ways to strengthen the lungs. Singing and chanting do this too!

Andrea Murphy works on a Wednesday, Thursday and Friday from 2pm to 8pm and a Saturday from 9am-2pm.

The Long Term Power of Tiny Choices by Caz Butler