For the month of February we will be taking a closer look at fertility. While most of you probably know that we treat women, you may not know that treating male infertility is also an incredibly important part of what we do to achieve results for couples everyday. This week director of Mornington Chinese Medicine and founder of the Fertile Life Method, Kirsten Wolfe, discusses just how exactly acupuncture can assist in male reproductive health, and why male fertility is such an important factor in trying to conceive (via www.fertilelife.com.au/mens-reproductive-health/)

In 40-45% of cases male infertility is found to be the involved in fertility issues, Women have become accustomed to seeking help for fertility, from western medicine, supplements and complementary medicine such as acupuncture, where as men aren’t catered for so well.

We pride ourselves of treating Male Fertility, at Fertile Life™ men have been part of our program since its inception 14 years ago.  It takes two to make a baby and sadly this is often missed with fertility programs or western medicine fertility treatments.  We have notice a dramatic decline in sperm morphology in the past 6 years from 30% to sometimes under 4%, so it is extemely important to get a recent sperm test.

Regardless of the cause the developing embryo from day 3 relies on the health of the sperm, as well as the female egg to develop.

The basic test accurately measures the number of sperm, their morphology (shape and size), their motility (ability to move forward), and the volume and consistency of the ejaculated sample. It is possible to have a more in-depth sperm test that will also include antibody testing and sperm DNA fragmentation.  A great sperm analysis has good volume, concentration, morphology & motitily of sperm, yet fertility is also dependent on viscosity, the ability of the DNA to replicate without fragmenting, and energy production of the cell itself.

The World Health Organization (WHO) has developed the following values for normal semen analysis:

This study indicates the importance of men achieving the highest sperm count and motility possible.
Many controlled and uncontrolled studies have reported acupuncture’s positive effects on sperm concentration, motility, and morphology as well as testosterone levels, and luteinizing hormone (produced in males and females, in males stimulates cells in the testes to produce testosterone). 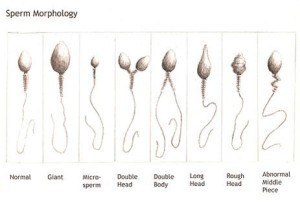 As well as your treatment at Fertile Life the difference will be made in the level of commitment to change of lifestyle. Treatments for semen problems take a minimum of 100 days (it take approximately 116 days for sperm production to be completed) before you see change in sperm analysis however acupuncture and herbs over a shorter time span is still beneficial. It takes time and patience. What is in the ejaculate today was generated three months ago. Semen analysis should be done with at least 3 days abstention and not more than 5 days.Treatment can be worked to coincide with an IVF cycle, with 2 -3 months preparation time before the cycle being optimal.

Stress: Because stress affects hormone levels, this can in turn affect the hormones responsible for sperm production.
Nutrient Deficiencies: A lack of zinc, selenium, foliate, and Vitamin C have been linked to a low sperm count.
Infections: Certain infections and sexually transmitted diseases can inhibit sperm production. Furthermore, some of the antibiotics prescribed to treat various infections can also be hazardous to sperm production.
Smoking tobacco.
Excessive alcohol consumption.
Illicit drug usage such as marijuana and cocaine.
Taking anabolic steroids.
Too much heat in and around the testicular region: Sperm needs to have a temperature that is four degrees below your normal body temperature in order to survive.
Obesity: Due to the excess fat that surrounds the groin area in obese men; the region can become overheated leading to a higher body temperature and lower sperm production.
Lack of Ejaculation: Contrary to popular belief, having too much sex will not affect your sperm count. In fact, the opposite is true. Not being able to ejaculate enough can lower your sperm count. It is recommended that a man ejaculate once every 24 to 48 hours.
Age: As man ages his sperm count decreases. This is typically seen in men over the age of 35.
Sexual Lubricants: A majority of over the counter lubricants can be detrimental to the production of sperm and should be avoided.
Varicocele: This is a swollen vein inside the scrotum that inhibits or completely eliminates sperm production.
Damaged Sperm Ducts: The duct system is responsible for carrying sperm from the testicles to the penis. If this is damaged as a result of injury, surgery, or genetic inheritance then sperm count will be almost non-existent.
Anti-Sperm Antibodies: Sometimes men will produce antibodies that will attack their own sperm causing sperm count to drop.

To speak to us about how MCM can help you visit www.morningtonchinesemedicine.com.au/ or check out our facebook page at www.facebook.com/MCM.acu/